In the last chapter, you used the dplyr package to answer some questions about the gapminder dataset.

You've been able to..

However, most of the code so far has only printed out results as a table. Often a better way to understand and present this kind of data is as a graph.

In this chapter, you'll learn the essential skill of data visualization using the plotnine package.

In particular, this chapter will show you how to create scatterplots, like the one you see here.

Scatterplots compare two variables on an x- and y- axis.

Visualization and data wrangling are often intertwined, so you'll see how the siuba and plotnine packages work closely together to create informative graphs.

Just like the siuba package, you'll have to load it with import.

In this chapter, you'll sometimes be visualizing subsets of the track_features data. For example, this code gets only tracks by the artist Billie Eilish.

When you're working with just that subset, sometimes it's useful to save the filtered data, as a new data frame.

To do this, you use the assignment operator.

First, write out the pipe with the filter verb.

This is the same as you did in the previous chapter.

Note that whether the name of the data, track_features is right after the ( or on its own line, the code works the same.

In this case, the variable name is billie.

Now if you print the billie dataset, we can see that it's another table.

But this one has only 27 rows: one for each track by Billie Eilish in the original data. 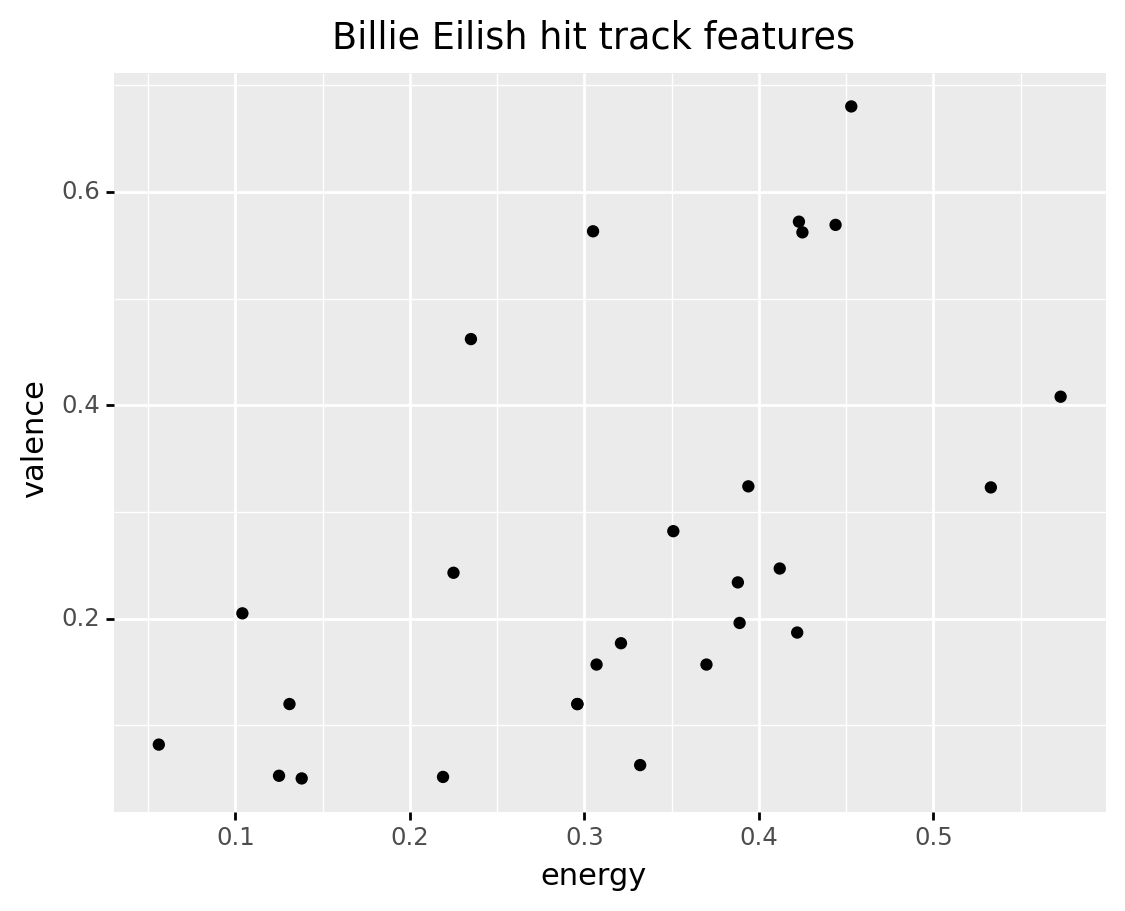 Suppose you want to examine the energy and valence of Billie Eilish's songs.

You could do this with a scatterplot comparing two variables in our track_features dataset: energy on the x-axis and valence on the y-axis.

There are three parts to a plotnine graph.

(Click the down button to see a breakdown of the code)

First is the data that we're visualizing. In this case, that is the billie variable you just created.

Second is the mapping of variables in your dataset to aesthetics in your graph.

An aesthetic is a visual dimension of a graph that can be used to communicate information.

In a scatterplot, your two dimensions are the x axis and the y axis, so you write aes (for "aesthetic"), parentheses, x equals gdpPerCap, y = lifeExp, telling it which variables to place on which axes.

The third step is specifying the type of graph you're creating. You do that by adding a layer to the graph: use a plus after the ggplot, and then geom underscore point.

The "geom" means you're adding a type of geometric object to the graph, the "point" indicates it's a scatter plot, where each observation corresponds to one point.

Together, these three parts of the code--the data, the aesthetic mapping, and the layer--construct the scatter plot you see here.

Scroll down to get started with practice!

In this exercise, there are two code cells. The first defines variables for tracks by different artists. The second creates a plot.

Read through the code and plot, and then modify it to answer the question beneath.

The code below plots hits for the roddy variable. Note that you could swap out roddy for any of the other two variables above. 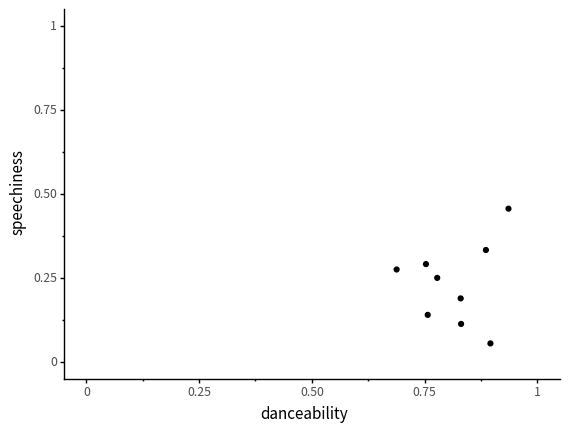 Who has the widest range of danceability? (i.e. biggist difference between highest and lowest)

Does it look like there any extremely popular songs over 15 minutes long?

There is not one concrete answer to this question. Make a plot below, and come up with an answer you might share with another person. 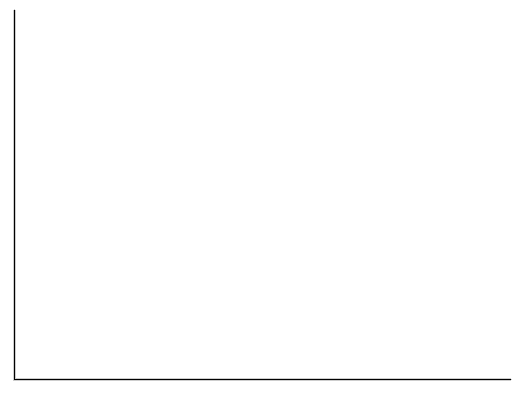 Does the lowest energy track belong to a "low energy" artist? In this exercise, we'll explore the questions using tracks by two artists.

Here is the track data sorted by energy.

First, filter the track_features data to create a variable named artist_low that has only tracks by the artist Simon Smith.

Next, create a variable named artist_high with tracks by the artist Scooter, who has the highest energy song.

Based on separate plots of their data, does the artist with the lowest energy track seem to have lower energy songs in general?

⚠️: Don't forget to replace all the blanks!