In the last lesson, you used the summarize verb to calculate an average either,

In this lesson you'll learn the group_by verb, which opens up a new option for calculating an average:

You use group_by to define groupings of data (blue and green chunks in diagram).

Then, you would follow it with summarize to convert those groups to a single value (like a mean).

For example, here you're finding the average track duration in Japan.

What if we weren't interested just in the average duration for Japan, but for each country in the dataset?

You could rerun this code and change the country each time, but that's very tedious.

Instead, you can use the group_by verb, which tells siuba to summarize within groups instead of summarizing the entire dataset. Notice that this replaces the filter country equals Japan with group_by country.

group_by(_.country) tells the summarize step that it should perform the summary within each country: within Argentina, then within Australia, and so on through Viet Nam, then combine the results.

Instead of getting one row overall, you now get one row for each country. There's now a year variable along with the new avg_duration variable.

You can also group by multiple variables.

Suppose you're interested calculating min and max streams within each continent, and each position.

Now the output has one row for each combination of a continent and position.

You might start by summarizing min and max streams across all the data.

Then, you might add a filter, so your summarize is over one specific grouping (position 1 tracks in Oceania).

Finally, you might replace the filter with a group_by.

Note that you might save this result as a variable and use it in a new pipe or visualization. For example, the new pipe might filter to keep where position is 1, so you can inspect min and max streams for the top tracks across continents.

Modify the code below so it calculates max popularity and average danceability for each artist.

Make a scatterplot of the data.

In the plot above, what strange thing is going on with the distribution of max popularity?

In the last exercise of the facets chapter, you examined track features for three artists.

We used a plot and intuition to judge who tended to have highest energy and valence tracks. 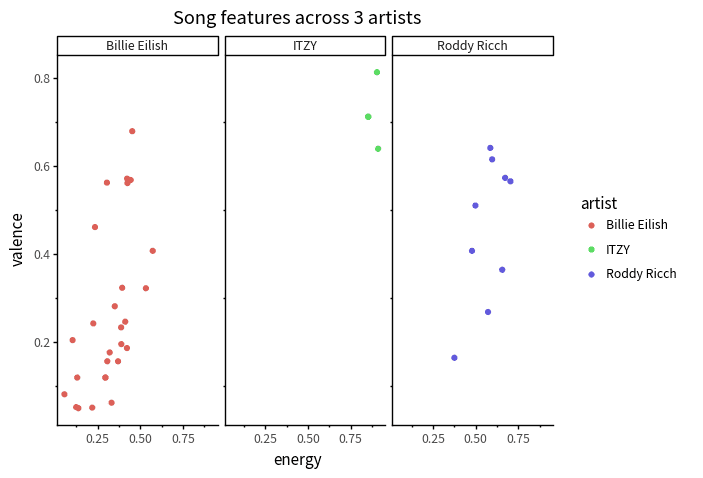 Now you should be able to answer the question more directly!

Use a grouped summarize to calculate the mean energy and valence for each artist.

Q: In this data, which artist has the lowest average energy, and what is its value?

Q: What about for lowest average valence?